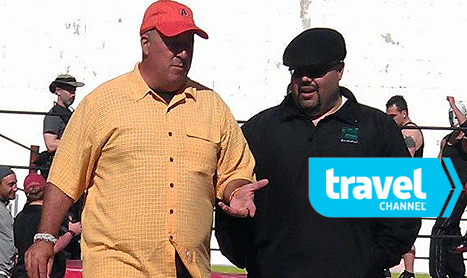 Pro Wrestling Revolution owner Gabriel Ramirez was in Tijuana,Mexico this past year, taking part in a project with the Travel Channel, filming a new show with  Andrew Zimmern, called “The Border Check”. The premier debuts this May 5th at 5pm on Travel Channel.

The Border Check – Andrew Zimmern discovers the food and fun that blur the line between the US and Mexico. He joins the Border Patrol for a day, he samples delicious, homemade cuisine. samples some of the best empanadas that he’s ever tasted, visits Hotel Caesar’s in Tijuana, birthplace of this famous salad and learns about a wrestling form called Lucha Libre.

The entire camera crew team was great to work with, our driver Mark made the trip fun in so many ways, I am sure he will never forget as well. We want to thank the producers and directors for the opportunity to take part in such a special project, we can only hope we provided you with all you needed. All this was made special because of the help of a family friend both in and out if Lucha LIbre, Rey Misterio Sr, providing guidance, direction and TJ stars like Hijo de Rey Misterio, Tony Cassanova, Espectro and many more. This was a day that everybody at Pro Wrestling Revolution will, never, ever… forget.