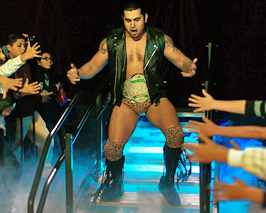 Pro Wrestling Revolution open the 2013 season in Watsonville, California. This show was solid from top to bottom on paper and even better once the show started. The fans showed their support by coming out and filling the building like we have never done before. We could not have asked for anything more!

This show had so many highlights, from the Mexican national anthem, Â Ultimo Panda having the entire crowd doing “Gangnam Style”, El Mariachiâ„¢ celebrating with the kids in the ring, New Pro Wrestling Revolution Tag Team Champions being crowned, and what to be a huge fan favorite, senior referee Tom Castor tossing Sparky Ballard, who seems to aligned himself with “La MigraÂ®” You had to of been there to feel the emotion!