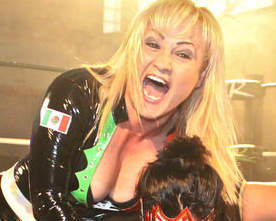 Pro Wrestling Revolution presented Reina de la Revolucion and by far was an eye opening experience  to all involved. So many talented wresters took part and showed those in San Francisco, and tuning in on www.wwnlive.com and on www.fite.tv that women’s wrestling is on the rise. These women were all fighting to become the new Pro Wrestling Revolution Woman World Champion.

These women were incredible!