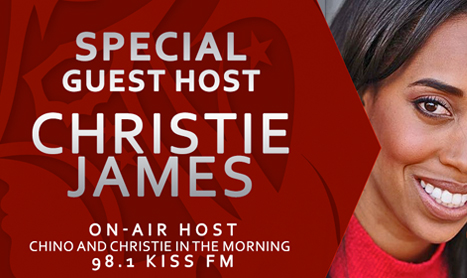 Pro Wrestling Revolution is pleased to announce the Queen of Bay Area Radio Christie James will be the host of Reina de la Revolucion! Christie has been on the Bay Area airwaves since 2004 and can currently be heard daily as a host of the Chino and Christie in the Morning Show on 98.1 KISS FM. Christie has a huge passion for our community she volunteers to help continue the mission of The Chron’s and Colitis Foundation, The American Heart Association and various LGBT groups around the Bay Area.

“We are grateful to have such a wonderful person and Bay Area personality to host our first female tournament, who better than the Queen of Bay Area Radio; Christie James” – Shannon Ramirez, VP of Pro Wrestling Revolution, LLC

Pro Wresting Revolutions’ first all-female tournament – The Reina de la Revolucion – will take place in San Francisco in the heart of the Mission district as a fundraiser for John O’Connell High School. This is the 12th event that Pro Wrestling Revolution, LLC has held at O’Connell and has raised funds for scholarships for graduating seniors and sports programs.
Pro Wrestling Revolution will be announcing the tournament participants within the upcoming weeks.

Join the Revolution and your girl Christie on June 4, 2016 in San Francisco, CA for an action packed night of Professional Wrestling and support John O’Connell High School.

###
About Christie James
Bay Area radio personality and event host Christie James has been rocking a bay area mic since 2004. She caught the radio bug after working for the American Forces Network while serving in the United States Navy. Christie can be heard daily as a host of the Chino and Christie In The Morning Show on 98.1 KISS FM. She is also a host on IHeart Media’s Pride Radio and on V101.1 FM. Christie is also a seasoned voice actor who has done campaigns with Old Navy, Blackpeoplemeet.com, and Google among others.

Her friendly, upbeat, and down to earth persona intermingled with breaking info on the best bargains, and news you can use to make your life easier, is what keeps the bay tuned in. Christie has had the opportunity to live her dream and share that passion with the community she loves, THE BAY AREA!
Facebook: ChristieLive
Instagram: ChristieLive

About Reina da la Revolucion
Pro Wrestling Revolution, LLC presents Reina de la Revolución
8 women will have a chance to vie for the title of 1st ever Reina de la Revolución this summer, for the first time ever, Pro Wrestling Revolution will hold a one night Reina de la Revolución tournament – Title is currently held by Christina Von Eerie. Eerie, who had previously held the AAA Lucha Libre Mixed Tag Championships with Alex Koslov, won the championship in June of 2014 unseating Cheerleader Melissa’s 8 month reign. Prior to that Melissa had traded the title back and forth with current Lucha Underground star Ivelisse including a title change on the very first WWL Pay Per View event in Puerto Rico.