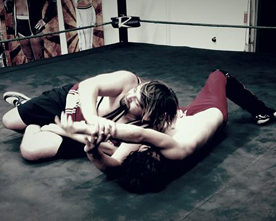 You don’t know the feeling of going against the grain of a loving father. I was always raised to listen and follow whatever my dad wanted because he spoiled me. If I ever opposed I wasn’t hit or punished, however I was vilified by my father. He would make me feel guilty because he bought me stuff and said I was unappreciative. By the time I was 14 I had decided what I wanted to do in pro wrestling but the biggest issue was always my father. Whenever I brought up wrestling or watched it, he would give me a look as if asking if I was serious. I decided that this one something I had to do on my own.

Every chance I got, over school breaks and such, I would go to work with my dad and learned the ins and outs of the AC business he and my grandpa ran. It wasn’t long before he was paying me to help out with jobs and with all the money I had earned from working, I decided to build a wrestling ring in my backyard. Untrained yet fearless of pain, I wrestled my brother for a year before I was finally of age to sign up for legitimate training. The decision was easy, Pro Wrestling Revolution: Dreams Into Reality. The hour and a half drive twice a week didn’t intimidate as much as my father did. I thought that I had already come far enough and it was too late to turn back. It was something I imagined myself loving and being great at. The moment I stepped in that gym and saw the real wrestling ring with the trainers inside and the trainees getting ready, it all became real. I no longer cared if my dad approved or not, all I cared about was my goal of training to be a wrestler. I convinced my father to sign the waiver with me by telling him that I would pay for every dime of it.

That next week was difficult and the training was hard but I never even thought about quitting. It was fun and exciting and I saw others who were already wrestling and knew that someday that would be me. I saw people come and go. I made friends and I lost friends. It’s a tough business to be apart of and it can sometimes be costly, but when you get in the ring in front of people and the spotlight is on you, none of that matters. Revolution is always going to be a family to me because they had given me something I thought I would never truly have: Happiness.

If I can give anyone any advice from my 17 year old mind, it would be to follow your dreams whether it’s wrestling or not. Do what makes you happy and when you do that, let everything else go. A happy life is a healthy life, and I’m a true believer in that.