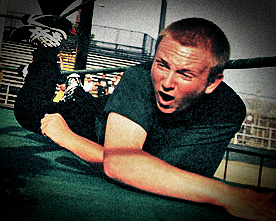 Pro Wrestling has always been the thing that I could rely on to take my mind off things. I started watching wrestling when I was 8 years old. I still remember when my brother walked in with a toy cruiserweight championship. I had no idea what it was, at that time, but thought it was super cool. Around this time, WWE was leading up to their survivor series PPV. The first time I turned on a WWE show I saw this one man, and his name is The Undertaker. He was wrestling as the American Bad Ass biker guy. At Survivor Series he was facing “The Boss” Vince McMahon in a Buried Alive match. This had me so intrigued because I wanted to see how they were going to do this. How were they going to bury someone alive on TV? I had to watch it! That match did not end at all how I expected it to. The Undertaker’s brother, Kane, helped Mr. McMahon bury The Undertaker alive. As a little kid that was probably the craziest thing I had ever seen. That was the start of wrestling in my life.

Around this time I was going through some things at school. The kids in my class would call me names and make fun of me. I never really said things at home, because I didn’t want my parents to get involved. Instead of trying to stop it I just let it build up inside of me. It seemed like no matter what I went through that week, it would all go away on Mondays and Thursdays (at that time Smackdown’s air day). There was a point though that I was grounded from wrestling when I was at my dad’s house. One day I was watching wrestling with my dad, and I started to get really excited. My dad was laying on the couch with his leg propped up on the arm of the couch. I ran and jumped on him, not meaning to land on his leg, and almost broke his leg. So for the longest time as long as I was at my dad’s house, I could not watch wrestling. It probably didn’t make things better, but when I was at my mom’s house, me and my brother would wrestle. During the commercial break, we would have little short matches in the living room. We even had titles that we fought for, the title that my brother first gave me was one of them.

A couple years had passed and now I had been watching wrestling for a few years now. Things were changing in wrestling, and also changing in my life. By this time, I was tired of holding things in, so I took things into my own hands. One of those kids said the wrong thing to me and after holding it in for so long, I popped him in the face and sent him to the floor. Now, I don’t promote violence, but holding it in for those years something had to be done for them to get the hint that I will not be messed around with anymore. After this incident happened, he apologized to me, and never messed with me again. I want to think that without wrestling I wouldn’t have been able to stand up to those kids. Now days I just let jokes go in one ear and out the other.

When I was 16 my brother moved to another state with his girlfriend. This made me very sad, because me and my brother were pretty close. Not only that, but he was my wrestling partner. We would watch wrestling together, then out of nowhere start wrestling. Now that he was a thousand miles away, we couldn’t exactly do this anymore. This is when wrestling started to kind of fade out. I still watched wrestling every week, but it wasn’t a big deal to me anymore. I had better things to do with my life than wrestling. I was in high school, so I’d rather hang out with friends or be outside playing baseball than inside watching wrestling. So most of the time I would just DVR wrestling and watch it later when I had nothing else to do. This was also because I didn’t really have anyone to watch it with anymore. I had friends that knew about wrestling, but wouldn’t care to watch it. It was time that I take a step back.

Now currently I am 19 and a student at San Joaquin Delta Community College in Stockton, CA. I am going to school to get my Associates Degree in Law Enforcement. I was planning on moving out with one of my friends and we were looking for a roommate. That is when I met my friend Broderick. On his Instagram page I saw that he was training to be a Professional Wrestler. That lit something in me, because I had always wanted to be a wrestler but never thought I would be good enough. I immediately messaged him and had to find out how to sign up. That is when he told me that he was training at the Pro Wrestling Revolution Training Academy. He brought me to one of the training classes to see how I would like it. That night I talked to the owner of Pro Wrestling Revolution, Gabriel Ramirez, and I signed up that night! I have loved every second of my training, from training classes to shows. I can’t wait to be able to go out and wrestle at the shows. I can’t wait to be able to go and show how hard work and dedication truly does. I can’t wait to make my dreams into a reality!