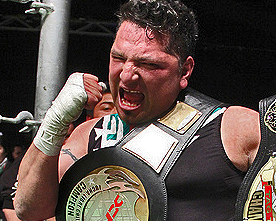 This past week at the Pro Wrestling Revolution Training Academy, there was a special guest trainer present. He was a very crazy guest, a very crazy trainer… he was the “Insane Luchador” Super Crazy! The former ECW World Television Champion, former World Wrestling Entertainment (WWE) Superstar and current Pro Wrestling Noah GHC Heavyweight Junior Tag Team Championship along with his partner Ricky Marvin, and with all his years in Mexico with Asistencia AsesorÃ­a y AdministraciÃ³n (AAA) and Los Perros del Mal, it is why it was such a special opportunity for all.

Super Crazy made his professional wrestling debut in February 1988, at just 14 years of age, after being trained by his older brother Rey Pantera. He took the ring name “Super Crazy”. He initially worked as an enmascarado, or masked wrestler, but lost the mask just over a month after his debut when he lost a “Luchas de Apuestas” to El Seminarista in March, 1988.