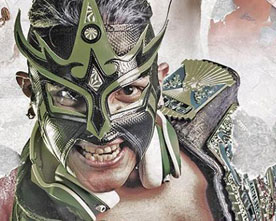 Pro Wrestling Revolution opens the 2016 season with its return to San Francisco! It is always exciting to do our events here and this year is no different. We have the debut of second generation lucha libre superstar who is known for his work world wide, from his time in Japan, with World Championship Wrestling ( WCW ) as part of the L.W.O and of course Mexico, as part of  “The Dinastia Wagner”, he is Silver King!

We have the JUICE! Pro Wrestling Revolution Jr. Heavyweight Champion, Juventud Guerrera makes his presence in city by the Bay, along with Woman’s Champion Christina Von Eerie and all your Revolution estrellas!

Get your tickets today! #Viva!