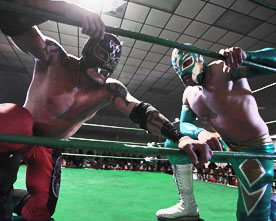 Pro Wrestling Revolution started it’s 2014 season of Lucha Libre in Watsonville, California with standing room only. With so many questions going into the show, all were answered as our fans came out in support and made this a great night.

The Border Patrol was able to bring gold to the group as Derek Sanders defeated El Mariachi with help, of sorts from his valet. Things are not quite clear why it happened, but mariachi seemed to forgive her. Only time will tell, but for now, your new Pro Wrestling Revolution Jr. Heavyweight Champion – Derek Sanders.