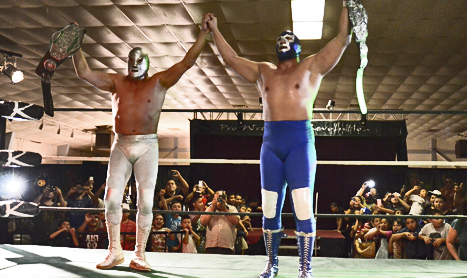 The duo originally won the titles on May 11, 2013 and has held them for over 636 days and was recognized as champions not only in the United States, but in Mexico as well where their reign included a title defense on a TodoXTodo show in Mexico City.

“We are happy to have Demon and Santo keep possession of the actual championship belts as a symbol of their record breaking reign and their status in both PWR and lucha libre history,” said Pro Wrestling Revolution promoter Gabriel Ramirez. “And now, as this chapter in our tag team title history closes, we look forward to opening the next chapter and crowning new champions in the months to come.”

Pro Wrestling Revolution returns to action on February 28. 2015 with new tag team champions to be crowned in a match between the top two contenders in “Kung Fu Hustle” Willie Mac & Ultimo Panda and “Los Luchas” Phoenix Star and Zokre.