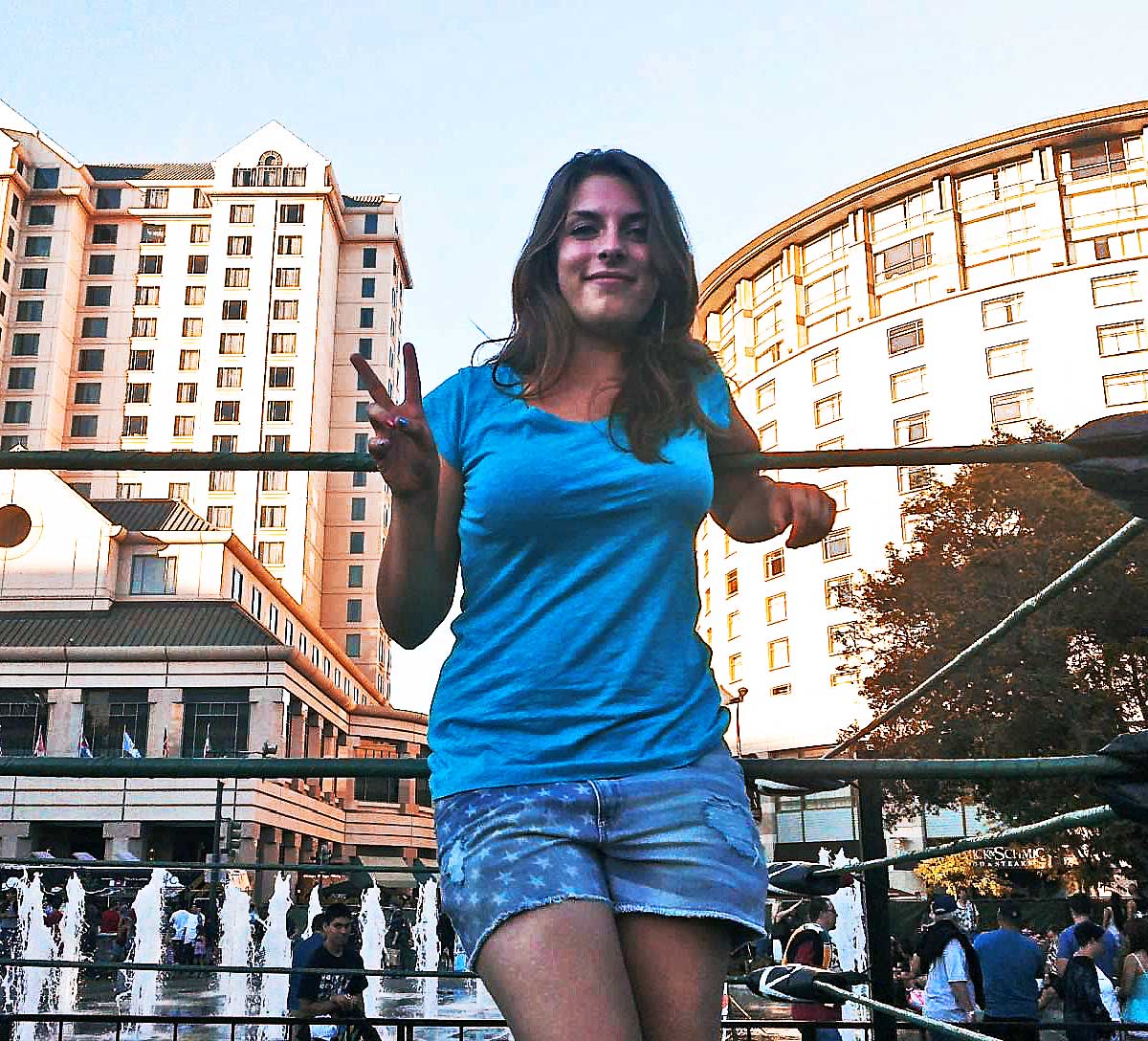 Everything started when I was very young: my brother used to watch Wrestling and I soon followed him. I’ve grown up watching WWE and my first dream work was to become a referee. Since I was a kid I’ve wanted to be part of this world. I loved watching SmackDown! and I remember I couldn’t stop staring at the television when Eddie Guerrero came out with his cars on “Viva La Raza!”. Eddie Guerrero’s been my first hero and he’s very important for me because he’s the reason why I want to become a Pro-Wrestler. I was proud to walk down town with his T-Shirt, too big for a 6 years old girl, and say to everybody that I cheered that guy who came from El Paso. I liked him so much that I started thinking of moving up to Texas as soon as I would finished the high school.
It was very hard when Eddie Guerrero died. I still remember everything about that day: I was at the elementary school and one of my classmate told me what happened. At first I thought – and I hoped – it was a joke but then, unfortunately, I found out it wasn’t. It was like losing a friend or someone of the family. November 13th, 2005 was one of my saddest day of my life.  I was so sad that I stopped watching Wrestling, because it wasn’t the same without Eddie.

For about 2 years I didn’t watch Wrestling. I found other hobbies and got closer to new things, such as cinema. I kept my passion for animals and I got better in horse riding, attending an equestrian school. But then I left it, ‘cause I realized it wasn’t the right place for me. I had different ideas about the teaching and the relationship with these amazing animals. I had a different way to respect horses and I still do have it.

Something changed in 2007 when I bought Sky – a kind of European DirectTv. One day I was looking for something to watch in Sport channels when I read “WWE SmackDown!”. I was surprised to see it, it was such very long time since I hadn’t watched it anymore. So, curious and thinking about my Wrestling memories, I clicked OK starting to watch it. It was so beautiful looking at those Wrestlers, old and new, that I used to love or hate as a child.
In the following weeks I kept watching, and every time I went closer and closer to this world that I didn’t know I missed so much.  And once I was thinking of my first dream-work, to be a referee, and I wondered myself what would have happened if I joined this world not as a ref, but as a Wrestler.  It was the best question I’ve ever asked myself.

I started to look for a gym in Italy where I could train. I was afraid there was nothing, because Wrestling in Italy is not so loved and respected as in America. But, then, I read I.C.W. (Italian Championship Wrestling).  I was thrilled and excited when I found the page of the website where I could see where gyms were. Many of them were and still are in Milan area, or by the way in Lombardia. But there’s one even in Genoa, the city where I live.  I couldn’t believe there was a training academy in Genoa.  As soon as I saw it I contacted the owner of the gym, who gave me all the infos I needed to know.

I was 13 years old when I stepped for the first time in a Wrestling training academy. It was April 17th, 2010 when I started to climb the huge mountain to become a Pro-Wrestler. At first I couldn’t train on a real Wrestling ring but then we found a place where we could set it. And because of my age I couldn’t do any “super” move.  So, in the first period, I did a lot of chain Wrestling. I was so excited to train and when I met all the ICW Wrestlers I understood I’d just found a big family.  It was so beautiful meeting all those people with my same passion. I still remember my first show when I met Queen Maya and, as soon as I met her ,she became my guide (with my trainers) and my source of inspiration. We got closer and I decided to go training with her in Lodi (Milan), so I could train with a girl. In Milan I also train with his brother, Mr Excellent, the owner of the promotion. And after 2 years, on December 28th 2013 I debuted in a little show in a tag team match.

I have to say that it’s hard in Italy if you like, and most of all, if you do wrestling. Here people don’t watch it. Soccer is the only sport. If they talk about Wrestling it’s just to criticize it and say that it’s fake. We’re humans and we all have different ideas, but it’s very annoying when you listen to the same old story, every time. And, to be honest, I love when I’m full of blues after  a training or a match ‘cause I can show to all those people that they’re wrong and they should watch their soccer game instead of talk about something they don’t know. ICW works very hard and, despite what the majority thinks of the business,  it never stops. In fact there are also a lot of people that love our shows and always follow the promotion wherever it goes. It’s a great success.

My approaching to Pro Wrestling Revolution started at the end of 2013 when a friend of mine, who live is the United States, invited me to come over during the summer. It was a dream came true: I’ve always grown up with the idea of the American Dream, and I’ve always looked at U.S. as my very country, also because of Wrestling. It’s where I’m going to live after the high school. During the following months we made it official and we started to book flights, organize all the summer, etc. Destination: San Jose.  As soon as I knew I would have gone to the United States I thought that I had to train there. I couldn’t stop training for 3 months, and, then, I was going to U.S. and it would have been stupid if I didn’t keep practicing. I started searching for an American promotion that I could joined, and how I found ICW 4 years ago, I found PWR (Pro Wrestling Revolution).  I read all the pages of the website and I was kind of nervous when I wrote them the first time. I’d read they did a 12 months course and I thought they would have never let me train for just 3 months. But I was wrong because they gave me this opportunity.

I stepped in PWR Training Academy for the first on June 21st, 2014. And it was also the first time I met “face to face” Gabriel Ramirez, the owner, and his wife Shannon.  Gabriel wanted to see my skills to decide which classes I had to attend – Beginners classes or Semi-Pro classes. To train with me there were other guys and La Furiosa, El Campesino and Nick Usher. I was a bit nervous and I was so happy when they told me I could join the Semi-Pro classes. It was so weird listening to the word “Semi-Pro” ‘cause I still have so much to learn!

I started training the next Tuesday. It was incredible, I was training in the U.S.A! I couldn’t stop smiling.  My trainer was Vinnie Massaro. He’s a great Wrestler and a great trainer, who  taught me a lot (and I had fun talking with him in Italian.. He’s from Sicily).  Every training was special: we went over many things. I’d already known some of them, but sometimes the American way was different from the European one.

Trainings were different from Italian ones and at first it was a little bit strange for me, but then I got used and I know it’ll be hard when I’ll come back to ICW Training Academy again ‘cause I’ll have the American style mode on.
Gabriel also gave me the opportunity to be part of a couple of shows, such as at the Bacon Festival and at the Santa Clara County Fair, where I both wrestled and managed (both for Vinnie and El Pistolero).  It was such a great experience to me: it helped me growing and it opened my mind. I lived the American Wrestling for 3 months and it became an addiction stronger than ever. I was already sure of what I want to do as profession, but this experience canceled all the little doubts that I could still have.

During the summer I pretty good learnt all the guys that train in PWR, also beginner guys ‘cause I had the opportunity to train with Robert Thompson, too.  As in ICW I was excited to know my fellows and I’d never thought I’d have fond so much with them. Every training day I couldn’t wait to go to the gym to hung out with them and learn something new.  I spent so many good moments:  from trainings and shows, to dinners and BBQs.  PWR did a lot for me and what it did is amazing.

My advice to you, reader, is that if you have a dream, follow it and make it come true. If you wanna become a Pro-Wrestler, contact PWR because these guys will help to bring your dream into reality. After the first month I used to say that I’d found friends in America. Then I started saying that I’ve found a family and when Gabe, at my last training, said “This is not a goodbye, it’s a see you later” I knew I was right. I cannot stop to thank everybody in the promotion, so in every language I speak THANK YOU, GRAZIE, GRACIAS, DANKE.  Anyhow you’re gonna read it, I’m sure you got the message.

I know I’m going to miss these guys , but thinking positively I’m gonna  see them later when I’ll come back home. #Viva