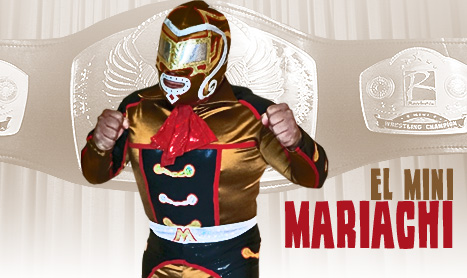 Minis have a place in Lucha Libre History since the early 1970’s. The Minis are not restricted to working outside of Mexico, although Mexico is the only country to regularly promote the Minis as a specific division until 2009 when Northern California based Pro Wrestling Revolution became the only United States based promotion to have created a specific Minis World Championship.

Over the years, Minis are patterned after “regular sized” wrestlers and are sometimes called “mascotas” if they team with the regular sized version.

Mini Mariachi™ is no different as he mirrors himself after El Mariachi™; who held the Pro Wrestling Revolution Junior Heavyweight Championship for over 250 days.