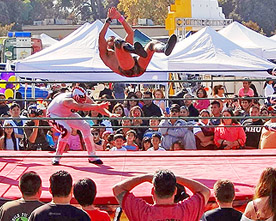 The matches were fun and exciting to all the families who came out to the event and were treated to a free Lucha Libre show. Seeing the developments of the students from the Pro Wrestling Revolution Training Academy is exciting to see as new talent gets produced.

We are thankful to have taken part of such a great and traditional event like “Dia de los Muertos” , we will see you all next year… Viva!