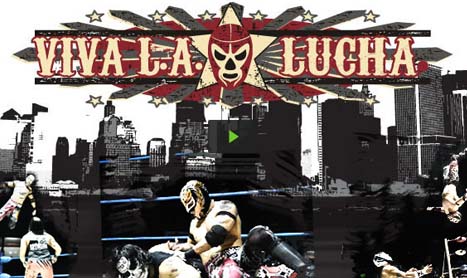 Pro Wrestling Revolution’s partner Masked Republic needs the help of all Lucha Libre, all fans in general, in order to bring something new to the Lucha Libre world. We ask for your help via Kickstarter, please go there and help in any way  you can.  Masked Republic’s Kickstarter.

The goal of Viva L.A. Lucha is twofold: First, it seeks to create an environment where wrestlers who specialize in either the Mexican “lucha libre” form of professional wrestling or the more “traditional”/”WWE style” form can compete with and against each other as a way to become experts in both styles, helping both the individual performers and the companies who need well trained wrestlers to produce their television shows all while ensuring the brightest future for the lucha art form. Our second goal is to give fans and viewers a unique program that will deliver incredible action and entertainment as tomorrow’s stars are groomed in front of their eyes today (with incredible “groomers” as you will see below)! And, with the unique rewards we have created for this campaign, backers can have an unprecedented say in WHO a wrestling show will feature, HOW some of the talent is used, and get to SEE the actual television taping as it happens including what is normally restricted behind-the-scenes access and uncensored producer commentary as the tapings take place.

We also want to be able to take networks a television pilot that is 100% in our vision – including the input from our fans and backers – so that they can see, not just on paper or in a sample reel, what tremendous potential a Viva L.A. Lucha series can have. Often times, leaving the creative process of developing a series WITH a network can lead to the network creating a series in THEIR image and not that of what the fans or producers really want.