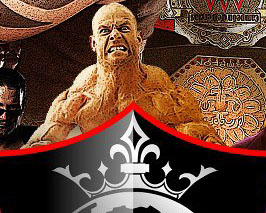 “El Patron” Oliver John from La MigraÂ®, Pro Wrestling Revolution Heavyweight Champion, is on his way to Puerto Rico for this massive show,billed as “Idols of Wrestling”. On this show is Blue Demon Jr., so what is going to happen, only time will tell. This adds to the location of their feuds, Arizona, California, New York, New Jersey, Tijuana, Mexico City and now Puerto Rico.Â Our newly crowned Pro Wrestling Revolution Womans World Champion, Melissa Anderson makes her way to WWL with an open invitation to meet whomever WWL has in mind. Being one of the world’s top female wrestlers allows you to have that much confidence.

We are very proud to have Pro Wrestling Revolution represented on World Wrestling League’s inaugural show, that is sure to change Puerto Rico wrestling.