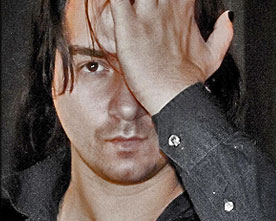 About two years ago I got fed up with my job as a freelance graphic designer. I was sick of the art world.Â I craved the roar of the crowd and short films and local theater were not cutting it for me so my mind drifted back to my childhood heroes menÂ like macho Man Randy Savage, Hulk Hogan, the undertaker and Rick flair . The larger than life entertainers of pro wrestling!

So one New Year’s 2010. I decided I was going to become a pro wrestler and announced it to my close friends who of course thought I was joking .Â So I decided that no matter what and no matter how I was going find a way. I looked around the Internet and talked to various people in the wrestlingÂ world that I had met at various conventions . They informed me that if I was to become a professional wrestler that I would have to attend a wrestling school.Â So I asked around and found a few schools . Unfortunately, many of them were far outside my price range completely or to far way for me to attend without moving.Â Yet I stood my ground and stuck to my guns. I simply worked every odd job that I could sold as much my things as I could to raise money put in a savings account.

Unfortunately, my grandfather fell very ill and had to be hospitalized . I needed to be here and I could not move away . a whole another year went by with outÂ me even touching upon my goal . I was about to give up. Then one day when I was on Facebook an ad appeared on the side of my screen it was an advertisement forÂ wrestling school. It had a picture of a man in a fur coat It read something along the lines: “do you live in the 408 a area code you want to be a pro wrestlerÂ then call ” it instantly caught my attention .Â I exclaimed out loud “I live in the 408 area code, I want to be a wrestler and have a fur coat !” I liked the Facebook page for the wrestling school thatÂ I had discovered and semi-jokingly reposted the ad onto my timeline . Letting my friends know that I was intending to follow through with my goal .

The same day I was contacted on Facebook to let me know that if I was genuinely interested to contact Gabriel Ramirez the owner of Pro Wrestling Revolution . I soon added Gabe Ramirez to my friends on Facebook . Unfortunately, the funds that i had saved havd been re-allocated to otherÂ endeavors that I looked on the pro wrestling Revolution website and saw that their prices were more than reasonable and perfectly within my financial means.Â Some time passed and if I remember right Gabe was out of town for a short period . I made a few more posts about how I wanted to attend school Gabe messaged meÂ asking me if I seriously wanted to train as a wrestler to give him a call. So I sat and I thought to myself “do I really want to be professional wrestler ?” ,Â and in my heart The answer was yes.

So the next day I gave him a call but the line was busy . Nearly instantly Gabe called me back .Â This meant a lot to me . As a few of the wrestling schools I had talked to were almost impossible to talk to on the phone and took forever to e-mail me back .Â Me and Gabe talked to the phone for some time and he asked me to come into the school. The following week as another new student was about to come in the school .Â The next Monday I came down and met with Gabe and found him to be extraordinarily amicable and humorous person.

After meeting with the trainers.Â Derek Sanders Â and KAFU as well as watching the students train that night, I was hooked and paid my gym dues ight then and signed up right at that moment.Â My dreams were finally coming true . And I was one step closer to achieving my goals. I find the instructors of Pro Wrestling RevolutionÂ (Derek, Kafu and Robert Thompson ) to be of the highest caliber and I hold them in great esteem.Â They are very patient and willing to work with you. Which I really need since I have a slow learning curve when it comes athletics.

Yet, the thing that impressed me most about pro wrestling Revolution Academy is not something pertaining to me ,Â but another student, who is also a local rapper by the name of Johnny ZukoÂ who also goes with the nickname “White Shadow”. We were working as the ring crew at an event in Johnny’s hometown of Watsonville, California atÂ the time several film crews were following Gabriel Ramirez making various documentaries on wrestling one of them having national syndication.Â Johnny had to leave early but for some reason Gabriel was very insistent that he stay, so hesitantly he did. Gabe and Shannon letÂ him know that it would definitelyÂ be worth it for him. Later that night me, Shadow and our fellow students were working as security for the event when all the sudden to Famous B and Rik Luxury came out to Johnny’s song” Family Matters.

Excited for Johnny.I looked around s so I could see his reaction get huge smile and his eyes were lit up like Christmas lights, this gave Johnny a potentially huge market reach and right then I realized that the school slogan “Dreams into Reality” were more than a slogan,Â more than a marketing gimmick for Gabriel Ramirez. I could see for him it was honestly a way a life.

He is a man who sticks to his word and, right then I was completely sure I had made the right choice in choosing Pro Wrestling Revolution Training Academy as my school of choice.