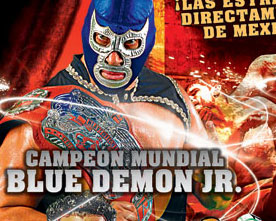 We have all our sponsors lined up, with multiple radio, television, print, and newspaper and of course, all our fans! This show has the makings of a night that we will all remember and an event that no fan would want to miss. that we are sure of.

Be sure to get your tickets early as only a small amount are available at $10, so don’t lose your opportunity for a great deal!Â We look forward to this great night of Lucha Libre and with a line up like the one booked, you just never know what will happened…. Expect the unexpected!