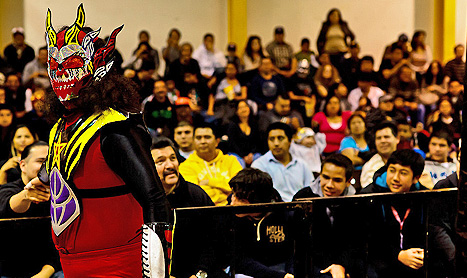 Pro Wrestling Revolution made its 2012 debut in the city by the bay, San Francisco, with a packed house of screaming fans, excited to see Lucha Libre in action. The show was a success on many levels, the school was able to raise money, and we are excited to be a part of that.

We were able to crown a new champion, per say, as we presented El Mensajero Magazine a Championship Title as a gift for the years of supporting Pro Wrestling Revolution and our events.

We had the debuts of Hijo de Dr. Wagner, Willie Mack, and the Persian Prince, a graduate of the Pro Wrestling Revolution Training Academy. We are thankful for the turnout and can’t think of a better way to start the year out. We are thankful to all our sponsors for their support and we look forward to seeing you all again next year.