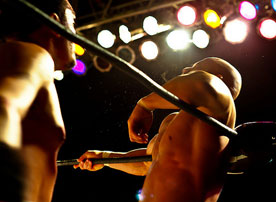 The show had a great flow, Â featuring all our top talent, our debuting students and Pro Wrestling Revolution Womanâ€™s Champion Lady Apache, as she made her way from Consejo Mundial de Lucha Libre (CMLL), fresh off her victory of the title. The main event match of KAFU and Oliver John, was one of the best matches of the year.

We look forward to coming back in 2012! Gracias!