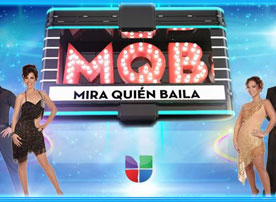 Â¡Mira Quien Baila! (also known as MQB) is a reality show airing on Univision in the United States. The show is the American/Spanish-Speaking version of the show from Spain’s TVE TV Espanola’s show of the same name and a spin-off of Come Dancing in England, a series that dated back to 1949.