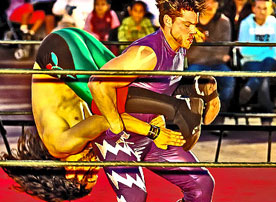 Pro Wrestling Revolution made its debut in the city of Chowchilla at the Chowchilla-Madera County Fair, on Sunday May 22. Pro Wrestling and Lucha Libre and the sights and sounds of the county fair, and of course all the families having a great time, a great way to wrap up five days of the Fair.

This show will featured all the stars of Pro Wrestling Revolution and a special match with the tag team of father and son, El Misterioso and El Hijo de Misterioso, a first for these two, and we are thankful to be the promotion they chose to do this in. It was later that we found out that El Misterioso retired from Lucha Libre after this show. On this show, we also crowned a NEW Pro Wrestling Revolution Jr. Champion, as Famous B defeated Mr. Wrestling IV! What a night!

We thank the Chowchilla Fair and we look forward to seeing them next year!Â Â¡Viva la RevoluciÃ³n!