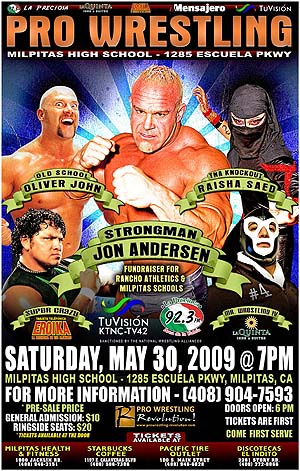 Pro Wrestling Revolution makes its debut in the city of Milpitas at Milpitas High School in a effort to help raise funds forÂ RanchoÂ Milpitas’Â athleticsÂ and music departments. We are thankful for all the help we haveÂ receivedÂ from Principal,Â Leticia Villa-Gascon. She is so dedicated to her students and theÂ community, we look to do the best for the show and the students.

This show has it all and we can’t wait to see it come to life. Making his debut, former ECW and WWE Superstar, he is Super Crazy!

Those are not our only debuting faces, we haveÂ Â Mystico de Juarez – Incognito, and the mostÂ incredibleÂ luchador you will ever see, he is the greatest show on earth, he is from CMLL, Mascarita Dorada!